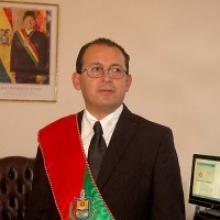 Lawyer in the Universidad Mayo Real and in the Pontificia de San Francisco Javier de Chuquisaca, he has a degree in Administrative Law in the Andina Sin Bolívar University and he is an expert in Municipal Law. He is the current mayor of La Paz Management  2015. He was also Chairman of the City Council of La Paz Management, Councillor Secretary of the City Council of La Paz and Chairman of the Special Committee which prepared the draft Municipal Charter of the Township of Nuestra Señora de La  Paz. He is a consultant on public contracts and is also the author of several Municipal Laws.