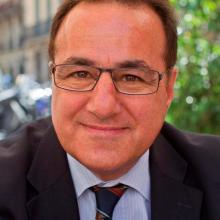 Victor Said, architect and urban planner, worked since 24 years, in the Urban Planning Institute of the Region Ile-de-France in Paris (IAU-IDF). Specializing in multiple approaches related with strategic planning and the metropolis, including the major Mediterranean cities ; he directed the construction of the strategic development plan and the Grand Casablanca. Victor Said  recently completed the work funded by the World Bank on the resilience and adaptability of the coastal cities in North Africa to climate change and natural disasters. Professor of the Sciences Po in Paris and of the French Institute of Urban Planning (IFU) in the University of Paris. Said has some articles published about metropolitan topics. Also he is the scientific Director of the Association of Planners Without Borders (USF) and leads the Regional Center of Training of Metropolis in the IAU-IDF.