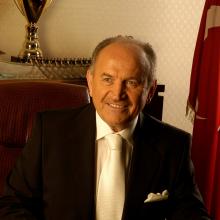 Mayor of Istanbul and President of UCLG

Dr. TOPBAŞ was born in Yusufeli - Artvin in 1945. He graduated from Faculty of Theology of Marmara University in 1972 and Department of Architecture of Mimar Sinan University in 1974. Dr. TOPBAŞ was elected Mayor of Beyoğlu District in 1999. In 2004 and 2009 consecutively, he was elected as the Mayor of Istanbul from AK Party in the local elections. He is the very first re-elected Mayor of Istanbul. The local elections of 2014 further brought him a third victory. He was elected as the President of Marmara Union of Municipalities and has been serving as the President of Union of Municipalities of Turkey since May 2009. He was first elected as the President of UCLG in 2010. He was re-elected in October 2013 for the 2013-2016 term. Dr. TOPBAŞ is a member of the “High-Level Panel of Eminent Persons on the Post-2015 Development Agenda” in 2012.